Does It Matter If Your Child Has High Or Low Functioning Autism? What’s the difference between high and low functioning autism – and why does it matter?

Like many of you, I am a member of several different Facebook groups which relate to my role as a carer – in my case, groups related to autism. I saw a post the other day, written by a distressed mother of an autistic child. She wanted to know why we kept referring to our children as ‘high’ or ‘low’ functioning – she felt that the way it was used meant that if your child wasn’t classified as ‘high’ it made them not as good somehow… What followed were over 200 comments of what ‘high’ and ‘low’ functioning meant to everyone – and the range of responses was astoundingly varied.

So, what is the difference?

“People with autism are often described as being ‘high functioning’ or ‘low functioning’. But there are no such diagnoses in the diagnostic manual. This means that the difference between high and low functioning autism can, in many cases, be based on the personal perspectives of a practitioner or teacher”. Source: https://verywell.com

Not exactly helpful, is it?!

The general consensus from my research, is that children who are able to communicate well, are more aware of social conventions, can manage well in academic settings, and quite often appear ‘normal’ are considered ‘high functioning’; whereas children who have limited or no spoken language, look and sound different to their peers, and are less likely to be included in typical classes or activities in an academic setting, are considered ‘low functioning’.

Let’s apply this to real life

I have identical twin boys who were diagnosed with autism at age 2. They are now 6-years-old. Firstly, this is a very young age to be diagnosed. Secondly, they were classified as ‘high functioning’. In fact, we were told by the psychologist who did the diagnosis, that with early intervention, we wouldn’t be able to ‘tell’ they had autism by the time they went to school, and could probably get them reassessed at that time, and the label removed. Sounds very positive and reassuring, doesn’t it?

Let me tell you about Twin A. At the time of diagnosis, it was very unclear whether he was on the spectrum. He was considered borderline but was given the diagnosis as he was delayed in speech, social skills and emotional maturity against his peers. He responded extremely well to early intervention, and although we had some hiccups and setbacks – we were all certain that if he did, in fact, have autism, that he was absolutely ‘high functioning’ or even ‘very high functioning’. For all intents and purposes, he could certainly pass as ‘normal’.

Fast forward a few years. I look at my child now and can tell you that sure, he continues to present as ‘high functioning’ because he has appropriate language for his age, is extremely good at maths and seems to fit in with his peers. And yet, he is not coping in an academic setting, looks and sounds different to his peers, often struggles with crowds and loud noises, and requires a lot of support to even participate in his classroom. So, according to the consensus – he is actually ‘low functioning’. So, what does that mean? Is he ‘high’ or ‘low’ now? Is the fact that we now need to send him to an autism-specific school mean that he is indeed ‘low’, or would we still deem him ‘high’ because his needs will likely be lower compared to some of his new peers?

No wonder that poor Mum was distressed!

Way too much emphasis is put on descriptions that don’t make sense or are even useful! In the end, what does it all mean? I’ll tell you – ABSOLUTELY NOTHING! Rather than focusing on ridiculous labels and inferences, let’s just focus on the areas of strength and issues that are challenging to each individual. Autism Spectrum Disorder is just that – a spectrum. To put sub-categories within that to try and explain a person and their abilities, or lack thereof, is pointless. Each child is special and unique in their own right and should be treated as such.

If I could see that psychologist who initially diagnosed Twin A, I would thank her for making the decision to give Twin A the diagnosis, and ensuring that he received vital early intervention supports. And then, I think I would mentally slap her for her ignorance and for misleading us on what having children on the spectrum actually looks like. Autism is such a complicated issue with complicated emotions – so let’s scrap the use of ‘high’ and ‘low’ because, in the end, it doesn’t mean squat.

Whether my child is ‘high’ or ‘low’ doesn’t change who he is. It doesn’t explain that he is incredibly loving and cuddly; that he wants to be a farmer or a train driver when he grows up; or that he adores his twin brother more than anything else in the world. If others have an opinion on where he functions – that’s just it – it’s their opinion.

To me, he is my child, and I think he is pretty damn awesome! And in the end, that’s all that matters.

Donna Leaker is a single mother & carer to Heath and Austin; 6-year-old identical twins who were diagnosed with autism shortly after their 2nd birthday. Other diagnoses/challenges include anxiety, sensory processing disorder, OCD, hypotonia & language disorder.  She is also the owner & operator of Addicted to Words  and valued community member.

We are here to support you!

At The Carers Place, we provide a safe and enjoyable space for carers and parents to have the opportunity to speak, share and learn without risking judgement or ridicule.  Why not join our private closed group Facebook community Parents and Carers Connect, The Carers Place and be supported by peers and professionals who get it? 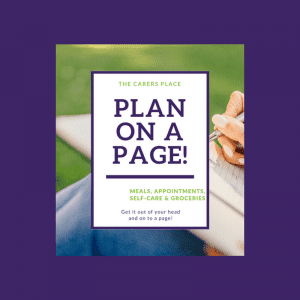 Check out our “Weekly Plan On A Page”.

Set out your week in style with spaces for Meals, To-Do’s, Self-Care and a space for your shopping list!

I have literally saved myself hours of time, hundreds of dollars and lots of head-space by using this handy tool!

I trust you will find it as helpful as I do, click the image to get yours sent to you!